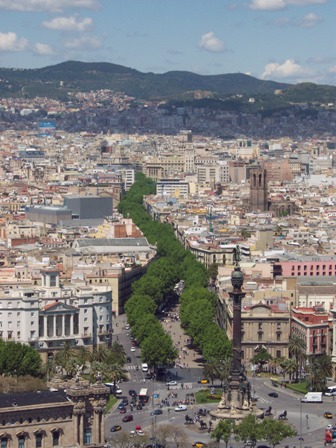 Spain is one of Europe's most geographically diverse countries, ranging from the near-deserts of eastern Andalucia to the green countryside and deep coastal inlets of Galicia. Spain is filled with historic buildings, from Roman aqueducts and Islamic palaces to Gothic cathedrals. Spain's diversity and regional variety make it an exciting place to spend your semester.

Barcelona is the capital of the region of Catalonia and the second largest city in Spain. It has a population of approximately 1,500,000 inhabitants. Multicultural and multilingual, inhabitants of the city speak both Castilian Spanish and Catalan, the official language of Catalonia.  Barcelona has been breaking ground in art and architecture for at least a century, from the turn of the century modernista architects led by Gaudí to the adventurous redevelopments of the waterfront. Barcelona offers eccentric creativity, cultural diversity, and endless amounts of energy revealed through its lively atmosphere, superb restaurants and top-class museums.

The Universitat Pompeu Fabra is a public university which was founded in 1990 and quickly became an institution synonymous with quality education. Since then, UPF has consistently been rated among the top five Spanish institutions. UPF is also a diverse and international institution. It maintains links with many of the finest international universities and holds one of the highest percentages of international faculty and students in Spain. Approximately 900 faculty and 500 administrative staff serve 10,000 students.

The university is located in beautifully renovated historic buildings in various Barcelona neighborhoods, including the heart of central Barcelona, very close to the Ciutadella Park, the Ramblas, the Olympic Village, and the Port.

The Ciutadella Campus of UPF, which houses Business Administration, Economics, the main library, the UPF Study Abroad program, and the Reception and Mobility Office, is an important base for Bentley students at UPF.

UPF emphasizes immersion in the academic infrastructure of the university and enrollment alongside local students. Bentley students take courses taught in English through the UPF undergraduate curriculum and the ESCI School for International Business. In addition, students enroll in the Hispanic and European Studies Program (HESP) with language and culture courses designed specifically for visiting international students.

UPF operates on a trimester system and follows a European standard of higher education. Students studying abroad in the fall enroll for Trimester 1. Students studying abroad in the spring may either choose to take their full course load during Trimester 2/HESP, which ends in late April; or, students who wish to extend their semester and broaden their selection of course offerings may enroll in courses in Trimester 2/HESP and Trimester 3, which ends in late June or early July.

Courses are taught by a series of formal lectures/classes together with a strong emphasis on coursework outside class, including individual project work, group project work, computer skills, library work, and class presentations. Students may find they have more free time during the week with less day-to-day homework than they are used to, but professors may expect a great deal more from them on exams.

Program participants are responsible for arranging their preferred type of housing in Barcelona: either a shared apartment, residence hall or homestay. Accommodations are located throughout the city in a variety of neighborhoods, enabling students to get to know Barcelona beyond just the university campus and tourist locations. All options are located in easy access of public transportation, though every student should expect to commute between 15-45 minutes. Students should refer to the UPF accommodations webpage for details on arranging their own housing. Alternately, the program advisor can put students in touch with an on-site accommodations coordinator (who charges a fee) to assist them in arranging their housing. Meals are not included in shared apartments or residence halls, but may be included in homestay placements.

Barcelona has two interconnected underground train systems: the Metro, comprising five lines, and the Ferrocarrils de la Generalitat de Catalunya (FGC), which has two metropolitan lines and another four which go beyond the city limits. Buses are slower but provide the advantage of allowing you to enjoy the city while you travel.
For travel outside of Barcelona, a number of private coach companies provide services all over Catalonia, Spain and Europe. The national railway company (RENFE) has a range of different train services and fare discounts.