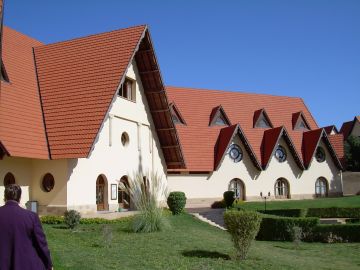 Located in North Africa, the Kingdom of Morocco has a long coastline on the Atlantic Ocean that reaches past the Strait of Gibraltar into the Mediterranean Sea. It borders Algeria to the east, the Mediterranean Sea and Spain to the north and the Atlantic Ocean to its west.  Morocco, a constitutional monarchy, is the only African country that is not currently a member of the African Union. However, it is a member of the Arab League, Arab Maghreb Union, Organization of the Islamic Conference, Mediterranean Dialogue group, Group of 77 and major non-NATO ally.

Morocco was the first country to seek diplomatic relations with the Government of the United States in 1777, and remains one of our oldest and closest allies in the region. Formal U.S. relations with Morocco date from 1787, when the two nations negotiated a Treaty of Peace and Friendship. Renegotiated in 1836, the treaty is still in force, constituting the longest unbroken treaty relationship in U.S. history.

Students will find plenty to do in this culturally rich country outside of class. Ifrane is home to a world-class ski resort, and in the summer it offers plenty of hiking and wildlife exploration. Nearby cities of Fes, Meknes, and Moulay Idriss offer fabulous shopping opportunities combined with deep historical traditions and sightseeing.

Founded in 1993, Al Akhawayn University in Ifrane (AUI) opened its doors to students in January 1995 with a completely modern and networked campus. The University is coeducational, residential and primarily undergraduate but has rapidly growing graduate programs. The outlook is international and tolerance is promoted and expected of students, staff, and faculty belonging to over 25 nationalities who live and work together.

The campus is located in the oak forest on the north side of the resort town of Ifrane. The town of Ifrane has a regular population of 12,000 that expands to nearly 100,000 on weekends, holidays and summers because it is popular destination its beauty in all 4 seasons. The ski slopes of Michlifin and Hebri are about 25 minutes from campus. The imperial cities of Meknes and Fez are an hour (65 kilometers) from Ifrane. The capital city of Rabat on the Atlantic coast is 2.5 hours from Ifrane; the Sahara desert is just 6.

Students take either one or two classes while studying abroad at AUI for the summer.
Note: Students will not be permitted to register for a class unless they have fulfilled all Bentley and AUI prerequisites.

Students can take one of the following language courses:

Or, students can take two of the following courses (6 week program):

HIS 1301 History of the Arab World

While attending AUI, Bentley students reside in on-campus dormitory accommodations. In the student residence halls, rooms are spacious and very well furnished. On-campus housing highly encourages the development of friendships among students and a sense of community within the university. "Housing" at Al Akhawayn is an organization and a program, and an emphasis is placed on community. The most obvious advantage of on-campus living is the convenience it offers. Just outside, you can easily access classes, faculty, AUI's library, campus recreational facilities, study buddies and friends. Another benefit of on-campus living is the sense of interconnectedness among people at AUI as part of a learning community. Students can eat in one of three on-campus dining facilities.