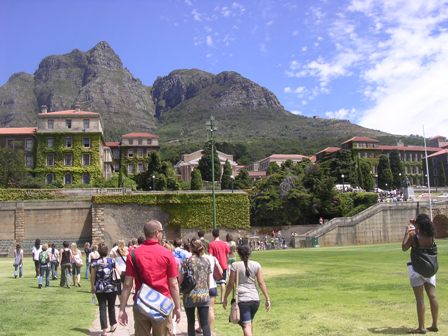 In South Africa, one finds the world's most dramatic landscapes, a unique wealth of animal and plant life, and a variety of fascinating cultures. The South African population is primarily composed of people from a variety of indigenous ethnic groups. Descendants of Dutch, French, English, and German settlers, and descendants of Indian workers make up about 12 percent of the population. To cater to South Africa's diverse peoples, the Constitution recognizes 11 official languages.

Cape Town takes its name from the term Cape of Good Hope, Africa's southern-most point, rounded for the first time in 1482 by the Portuguese explorer Bartholomew Diaz. Cape Town is home to nearly three million people. Steeped in a rich history, the city is a cultural melting pot influenced by Xhosa, Zulu, and other African tribes from the north; and Indonesian, French, Dutch, British, and German settlers. The fast pace and bright lights of the urban center juxtaposed with the pristine coastlines and magnificent countryside creates a fascinating environment for students.

Founded in 1829, the University of Cape Town (UCT) is South Africa's oldest university, and is one of Africa's leading teaching and research institutions. UCT was formally established as a university in 1918. In 1928, UCT moved the bulk of its facilities to the magnificent site on the slopes of Devil's Peak on land bequeathed to the nation by Cecil John Rhodes. UCT earned itself the nickname of "Moscow on the Hill" during the period of 1960 to 1990 for its sustained opposition to apartheid, particularly in higher education.

UCT enrolls more than 21,500 students. There are more than 4,000 international students at UCT, including almost 700 in the Semester Study Abroad program.

An essential goal of UCT's mission is to produce graduates who are capable of critical and creative thinking, and who can also contribute to diverse social and economic needs, build a vibrant civil society, and consolidate democracy. UCT believes that focused engagement enhances excellence in both teaching and research and has developed a conceptual framework for social responsiveness.

The University of Cape Town offers coursework across a range of disciplines. Although students are assigned to one Faculty as their home base, it is possible to enroll in courses across multiple Faculties. Courses are worth 3, 4 or 6 credits depending on the level of instruction (first year, second year, or third year and above), and students typically enroll in a total of four courses. Students make preliminary course selections in their UCT program application, however final registration takes place upon arrival.

Classes are typically taught in a large lecture style that could include well over 100 students. Complementing most courses are smaller tutorial groups, allowing for discussion of content. Courses at UCT are usually assessed through a combination of essays, assignments, tests, class participation/presentation, and examinations. In order to take the final exam for a class (which is required to earn a passing grade), students must earn a "DP (Duly Performed) Certificate" that confirms satisfactory attendance during the semester and completion of assignments. Exams usually count for a significant proportion of the final course result.

Program participants live in off-campus accommodations that are reserved through the IAPO at UCT. All housing is fully furnished and includes basic bedroom furnishings (bed, desk, chair, cupboard), bedding and bed linen (pillow, duvet, blanket), kitchen equipment including cutlery, pots, pans and cooking utensils, refridgerator, stove, and a furnished communal living area. Most houses have laundry facilities and those that don't either have a laundry service or are located close to a laundromat.

All houses are secured with protective window bars and security gates. Electricity, water and cleaning services are generally included in but some apartments have a pay-as-you-go electricity system. Meals are not included and other additional expenses may include telephone calls and television rental.

Most of the houses are within walking distance of the campus (less than 2 miles). Because of its location on the slopes of Table Mountain, the UCT campus is very steep and there is a university shuttle route that transports students from lower and middle campus to upper campus. Public transport in the form of minibus taxis is also available along Main Road.

The Jammie Shuttle, is available free to all UCT students and operates between residences, all UCT campuses and some public bus, train and parking facilities in the local vicinity. The scheduled service is available on weekdays, weekends and holidays, during both term time and vacations. It also includes a late-night service.

Students also make use of the Boogie Bus. The Boogie Bus allows students to make appointments, day or night, to be picked up by the driver and driven to a specific destination.

Students make their own flight arrangements and arrive in Cape Town about two days prior to the start of orientation. Students will send their arrival details to the IAPO staff at UCT who will arrange for an airport pick up.

The six-day orientation program typically includes a guided tour of the Cape Peninsula, highlighting the natural beauty of the Cape, including a visit to Cape Point, an opportunity to see the penguins at Boulders Beach, hiking, lunch and refreshments. An information and activity day includes sessions on personal safety at UCT and in Cape Town, international clearance, HIV and AIDS in South Africa, culture shock, travel opportunities, landlord briefing and house rules, cell phones, walking tour of surrounding area to see location of shops, banks, etc. Students will have the opportunity to participate in other cultural and social activities throughout the week.

A community service day during orientation introduces students to the townships in the Cape. Students will visit community centers in the townships where they may volunteer through SHAWCO.

The opportunity to offer service to the disadvantaged communities of Cape Town is a highlight of many students' education abroad experience. South Africa has inherited a fractured, complex social and political system, where resources are not adequate to meet the needs of the people. The legacy of apartheid is still with the people of South Africa and, through community service, UCT attempts to redress some of the injustices of the past by contributing to the future of communities in need.

Study abroad students have the opportunity to participate in community service through the Students' Health and Welfare Centres Organisation (SHAWCO). During the orientation program, students are taken to the various community service sites, welcomed by the communities who benefit from the work done there, and given first-hand knowledge of the difference their contribution could make. Volunteers are enlisted at the end of the day.

Students may choose to volunteer for as many, or as few, hours per week as they are able to fit within their chosen academic program. A certificate of participation is issued at the end of the semester if a minimum of 35 hours of service has been completed.