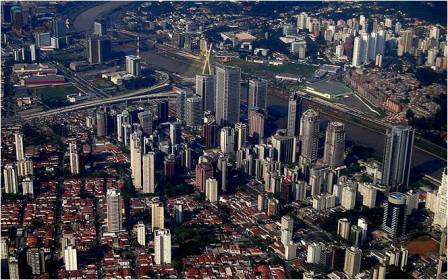 Brazil is known world-wide as the land of samba, football and beautiful landscapes.  Brazil is a huge country marked by incredible variety, ranging from Amazon's tropical rainforest to São Paulo’s sky scrapers.  The Brazilian people represent a wide variety of races and nationalities: Portuguese, Italian, Spanish, African, German, Japanese, Korean, Arabian, Russian, Jewish, and several native tribes. Nonetheless, all of them are considered genuinely Brazilian. All cultures have contributed to shape the Brazilian identity.

Brazil is among the ten largest economies of the world. As a result of the recent successful stabilization program, Brazil is now considered one of the most promising emerging markets. Most major multinational companies in all sectors have investments in Brazil, such as General Motors, Siemens, Sony, Cargill, Procter Gamble, Citibank, IBM, just to name a few.

São Paulo is the largest city in South America. An industrial, commercial, and cultural pole, it represents Brazil’s dynamic economic heart. The Greater São Paulo consists of a gigantic urban area with a population of around 18 million people. The city is located high in the Brazilian mountains, in a region formerly dominated by the rainforest, which has been almost totally destroyed in this century due to São Paulo’s growth. São Paulo lies 100km from the Atlantic coast, and is not far from the countryside.

The University of São Paulo is the largest higher education and research institution in Brazil, boasting a student population of more than 75,000 across its seven campuses.  Established in 1934, USP has an outstanding reputation around the world, especially in Latin America.  It is a public university with open access for students selected by the vestibular (Brazilian entrance exam for universities).  After graduation, many of these students move on to leadership positions in different segments of both public and private industries.

The School of Economics, Business and Accountancy (FEA) was founded in 1946 and continues to maintain its close ties to the Brazilian government and industry.  Currently, FEA consists of six builidings and 4,000 students at the graduate and undergraduate levels.  FEA students and faculty enjoy a range of modern rescources, such as wireless networks, international teleconference facilities, electronic databases, and a well-equipped library.

Almost all courses at USP are taught in Portuguese.  However, most professors allow students to write papers and take exams in English.  With the exception of a required Portuguese language course, Bentley students will choose courses from the Faculty of Economics, Business, and Accountancy (FEA).

Although there are no on-campus accommodations at USP, the International Office can give you a list of local apartments or flats that you can rent for a few days while you secure semester-long accommodations.  Flats are a good option. They are comfortable, well located (near dowtown and not too far from the campus) and they offer many facilities including kitchens. You can also share with other exchange students.