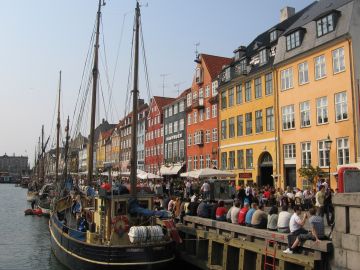 Denmark is located in northern Europe between the North Sea and the Baltic Sea. It is one of the three Scandinavian countries and consists of a mainland peninsula, Jutland and 406 islands. The capital of Denmark, Copenhagen, is situated on Zealand. The mother tongue of Denmark is Danish, which is closely related to both Swedish and Norwegian; however, most Danes speak English to a high standard, and German and French are also widely spoken. Denmark has a population of 5.3 million.

A one thousand year history written by ambitious kings, inspirational artists and celebrated designers awaits you in the medieval streets, 17th-Century canals and modernist architecture of Copenhagen. From its origin as a humble fishing village, to its heyday as the glittering capital of the Danish Empire, to its current position as one of the world's premier design capitals and Scandinavia's pre-eminent city, the stories and characters of Copenhagen's history are there to be discovered in its palaces, copper-roofed town houses and atmospheric cobbled squares.

Copenhagen Business School (CBS) is one of Denmark's largest universities as well as the second largest business school in Europe. The institution, with an overall student population of 14,000, boasts over 1000 exchange students per year from nearly 50 countries. Built in 1917 by the Danish Society for the advancement of Business Education (FUHU) as a privately financed institution, CBS was integrated into the national system of higher education in 1965. CBS offers a truly international environment with over 800 exchange students each year from 45 different countries.

CBS offers a portion of its curriculum in English and is focused primarily on business courses, with a smaller number of courses on offer in arts-science disciplines. Courses are generally worth four credits.  Bentley students are required to take two courses, each worth four Bentley credits.

CBS program participants must be prepared to experience differences in class format, evaluation methods, and grading standards. It is common at CBS for course grades to be based entirely on one final examination. Students will be held to the academic standards of CBS, and Bentley honors grades as reported on the CBS transcript.

As a student at CBS, you will live in an international residence hall equipped with kitchens, and a bedding pack will be provided upon arrival. Residences are located within easy access to the Metro, to CBS, and the center of Copenhagen. There is also a pub on campus where students can buy hot meals, salads, sandwiches, etc., however there is no formal meal plan.

Social Program: Students are highly encouraged to take advantage of the optional social program organized by the Summer Crew, which offers a package deal including two to three events each week around the city. In addition, several weekend excursions are organized at a great discounted price. You will get to know modern Danish Design and Architecture, as well as a little of the history from the Iron and Viking Ages.