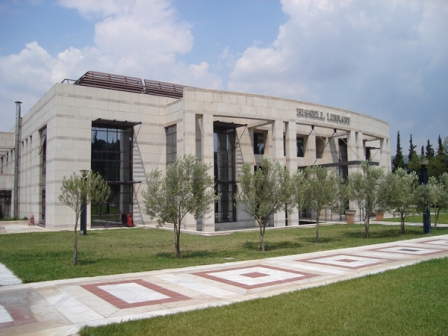 Thessaloniki is known as Greece's "second city". With a population of about a million and two large public universities, it is a human-scale city in which one in ten pedestrians is a university student. With a modern seafront, it is a Mediterranean city that has also preserved the vestiges of its Roman and Byzantine history. Visiting students literally walk in the footsteps of Phillip, Alexander and Saint Paul and will be able to visit nearby Vergina with the magnificent tombs of the ancient Macedonian kings, sail in the Thermaikos bay, and take weekend trips to Chalkidiki, famous for its sandy beaches. Summer time is also a period of festivals and outdoor concerts.

The American College of Thessaloniki (ACT) is located on a beautiful hillside campus approximately 25 minutes from the city center. Originally established as a seminary near Constantinople in 1840, ACT took the name Anatolia College in 1886 before being relocated to Thessaloniki in 1924. With a truly international student body representing over 22 countries, ACT provides a stimulating global learning environment for its more than 500 students. This leads to an average class size of 19 and a student-faculty ratio of 10-1. As more than half of the student body is Greek, visiting students are immediately involved in Greek life.

ACT offers a wide range of courses in the areas of Business, Humanities and Social Sciences, and Technology and Science. Students at ACT receive a high quality, U.S.-style education, supported by experienced faculty, modern information and library resources, small classes and individualized attention, and a rich academic curriculum. ACT is accredited through the New England Association of Schools and Colleges (NEASC).

During the summer session, students will take two courses, one which will be a required Greek language course:

The American College of Thessaloniki offers Study Abroad students off campus accommodation in downtown Thessaloniki. Rooms and studios in apartment complexes are all fully furnished (including kitchen appliances in individual studios or in common areas), and are assigned on a first-come-first-served basis. Off-campus housing locations are well served by the city's reliable bus system with buses running at 10-15 minute intervals. In addition, during the Fall and Spring semesters the college provides free bus service in a morning run (picks up students from their residence) and an evening run (drops them off at their residence). Assistance with off-campus housing is provided through the Office of Academic & Student Affairs.