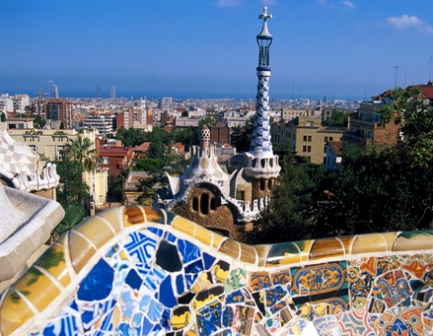 Spain is one of Europe's most geographically diverse countries, ranging from the near-deserts of eastern Andalucia to the green countryside and deep coastal inlets of Galicia, and from the sunbaked uplands of Castilla-La Mancha to the rugged, snow capped Pyrenees. Culturally, Spain is filled with superb old buildings, from Roman aqueducts and Islamic palaces to Gothic cathedrals.

Barcelona is the capital of the region of Catalonia and the second largest city in Spain. It has a population of approximately one and a half million inhabitants. Multicultural and multilingual, inhabitants of the city speak Catalan, the official language of Catalonia.  Castilian Spanish is also spoken but not as widely used.  Barcelona has been breaking ground in art and architecture for at least a century, from the turn of the century modernista architects led by Gaudí to the adventurous redevelopments of the waterfront. Barcelona offers eccentric creativity, cultural diversity, and endless amounts of energy revealed through its lively atmosphere, superb restaurants and top-class museums.

If you have already declared a Spanish Major or Minor or are considering it for the future, it is advised to explore some of our other programs in Spanish speaking countries.

API students in Barcelona can choose from three different housing options. Students may choose to live with a host family, in a student apartment, or in a student dormitory.

Students who choose to live with families share a double room with a fellow API student and are provided with 2 meals per day and laundry service. Students can request single room for an additional fee (subject to availability).

API apartments in Barcelona generally have 2-4 bedrooms (almost all bedrooms are doubles) with a shared kitchen, common area, and bathrooms. Apartments are located throughout the center of Barcelona, and tend to be 30-45 minutes from the universities. Students can opt for a single room for an additional fee.

Students who would prefer apartment-style living alongside other Spanish and American students would enjoy API’s dorm/residence hall option. The student dorm has both single and double-room options, with a shared kitchen and private bathroom. Internet access is guaranteed in all rooms. The apartment option carries an additional fee.

During the program, students have the opportunity to broaden their classroom education through several organized excursions, which are included in the price of the program. Overnight lodging, breakfast, entrance fees and transportation to and from the excursion locations are included. Although excursions are subject to change depending on availability, weather and other factors, students are provided with an itinerary for their program excursions prior to departure.